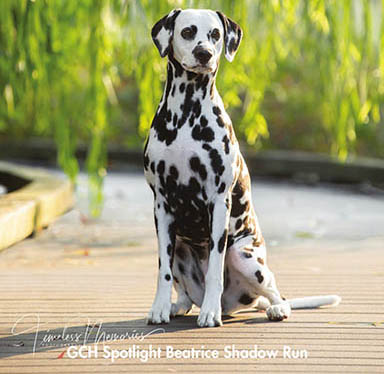 Although the usual meaning of “puppy love” is an adolescent crush, in dogs it can mean that immediate feeling when you know a puppy is the perfect one for you. That’s how I reacted in Orlando when I saw Connie Wagner bring puppy Beatrice (now GCH Spotlight Beatrice Shadow Run) to the ring for her first shows in December, 2017. Just days over six months, this girl was the picture of pure joy: gorgeous black markings, stunning movement, and the sweetest, most outgoing personality one can imagine in a Dalmatian. Bea made her Florida debut with outstanding recognition from judges including Winners Bitch at the Mid-Florida Dalmatian Club specialty and Winners Bitch and Judge’s Award of Merit at the AKC National Championship show.

At our 2018 DCA National Specialty, Bea was Winners Bitch under breederjudge Mary Miller and Reserve Winners Bitch at the Greater Denver Dalmatian Club specialty under breeder-judge Meg Callea. Returning to DCA in 2019, Dana Cline gave her the nod for an Award of Merit.

Connie and I had been talking. My two boys, Dylan (DCA National Specialty Winner, MBISS, RBIS, International Champion GCHG Rockstar Thanewood Freewheeling) and Kyle (GCHS SunnyOaks N Thanewood Power Forward) had retired, with both appearing in the DCA 2017 Top Twenty. When I first saw Bea’s pedigree, as I expected, she was related to both of them.

In late June, Bea came to stay with my friend, and professional handler, Russella Bowen for training and with me to play with Dylan. (Sadly, we lost Kyle to inoperable brain cancer in March). With her first shows in late July in Greenville SC, she finished her Grand Championship, went Group 2 at the Piedmont KC show and Best of Opposite at one of the Dalmatian Club of the Piedmont specialties. She has continued with Breed wins at the Central Carolina Dalmatian Club supported entries and several all-breed shows through mid- September.