Jim & Pat Bugay got their first Dalmatian in 1977. Her name was Dottie. This
Dalmatian started a lifetime love affair with Dalmatians.

Jim trained a number of Dalmatians in Conformation and Obedience, most
notably was Am/Can Ch. Mt. Bryton Adventureland Mac AM/Can CDX. Mac
finished his championship very quickly, shown by Pat and Jim. While taking
time off for Mac to mature, Jim and Mac started obedience training where they
excelled. Mac then went on to become a group winner in the Conformation ring
and also finished his CDX. Jim and Pat were also members of the Dalmatian
Club of Detroit. They were an active part of the Dalmatian Club and held
board positions and supported the club in many ways. As Mac and Jim neared
retirement, family commitments with their kids, Karen and David, became the
focal points in their lives and the Dals including Mac became the kids’ constant
companions.

Fast forward to 2013 and Pat decided to get Jim another Dalmatian as their
senior dal was not doing well and the family ached to have a new dalmatian
puppy, Pat reconnected with Debbie who had lively, sweet 6 month puppy
looking for a show home, named Charlie, later to be known as GCH. Bret D N
Engine Co Rising Star. Pat and Debbie piloted Charlie to his championship. Jim
and his daughter, Karen showed Charlie to his grand championship. Charlie
has become Jim’s constant companion. Pat, Jim, Karen and David then added a
couple of more Dalmatians, Ginger and her brother Rudy, to the Adventureland
household. Eventually Ginger (GCH Bret N Adventureland N Troika Snapping
to the TOP), who shown by Karen to her championship , was bred to Charlie
in 2016. In December 2016, Ginger whelped 8 puppies. Three puppies in
that litter finished championships; two girls, Stitch and Charlotte finished,
and their brother, CJ who is on the Winter SPOTTER. CJ finished 2019 as the
Number One Dalmatian All Systems. We could not be prouder of Karen and
David as adults. Karen has become a wonderful handler and is the future of
Adventureland Dalmatians. Thanks to Marie Zink (co-breeder of Ginger’s
litter), Joanne Shupp and John Bachey for your love and support. It means the
world to us! 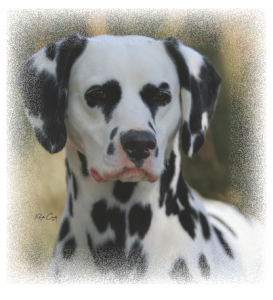